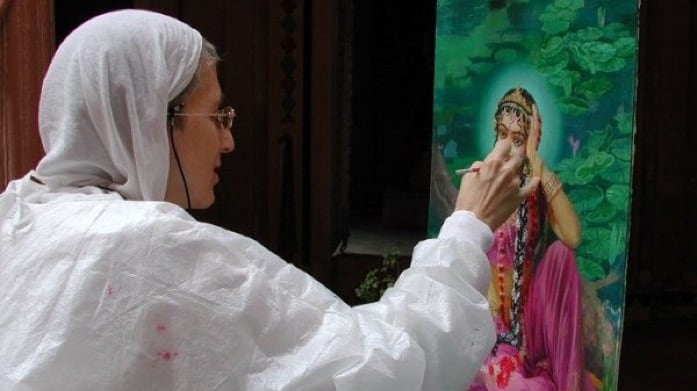 After graduating from Music and Art High School in 1964, Syamarani dasi became a student at New York City College, majoring in art and history. In 1966, at the age of 19, she met her spiritual master. Her spiritual master is His Divine Grace A.C. Bhaktivedanta Swami Prabhupada, the founder-acarya of ISKCON, and world-famous preacher of Krsna Consciousness and Vedic culture, and the saintly spiritual master of millions of spiritual seekers. Soon after meeting him, she was initiated and given the name Jadurani dasi. (Later on, in 1992, he inspired his spiritual successor, Srila Narayana Maharaja, to give her the additional spiritual name of Syamarani dasi, and she became one of his first few disciples.
Srila Prabhupada taught her the philosophy of Krsna consciousness, also known as Sanatana-dharma and bhakti-yoga – the timeless ancient wisdom of spiritual India. Even when she was still new to Prabhupada and Krsna Consciousness he sent her to various yoga groups, schools and universities, including Harvard University. There she represented her spiritual master’s words in the mission to spread the science of God.