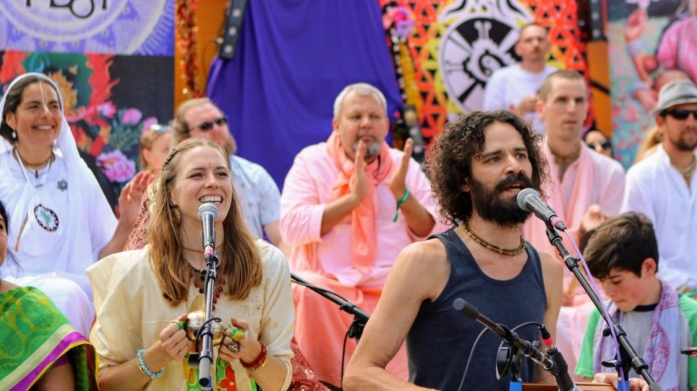 Musically gifted since childhood, Jacob discovered he was able to learn practically any instrument easily.  Shortly after he picked up his first guitar in 1989, he was already performing locally in his hometown of Ojai, CA. His Soul-deep love of music naturally brought him to immerse himself in many branches of the yoga of sacred sound, and finally to Kirtan, which he fully dedicated himself to in 1999. He has been refining and revolutionizing the art ever since, studying Sanskrit, Indian Classical music and learning the nuances of Bhakti from various advanced teachers on the path.

Chintāmani is a diverse yoga teacher with over 700 hours of training in multiple forms of hatha yoga, and years of intensive immersion in the Bhakti yoga traditions of India, her second home. Her main focus is on the path of Kṛṣṇa Bhakti, which has brought her under the tutelage of several of the living masters of the tradition.