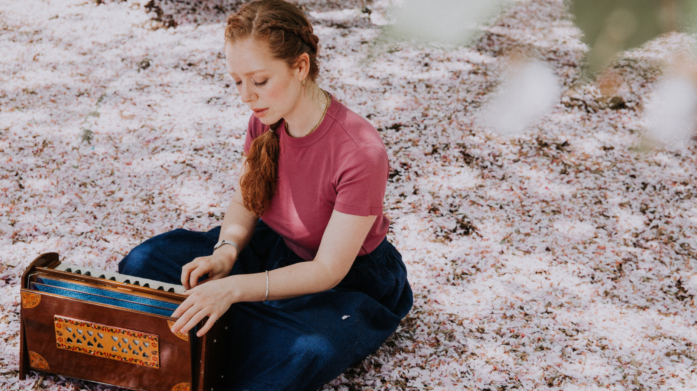 Jahnavi Harrison was raised in a family of Bhakti-yoga practitioners at Bhaktivedanta Manor, one of England’s most important spiritual landmarks. As a child, she was fascinated with song and story and has nurtured that interest through her life long exploration of music, dance, visual art and the written word. She is a musician who aims to channel her creative expression as a path to self-realization and service.

For over 12 years she has traveled the world, offering her voice and violin playing in the performance of sacred music and call-and-response mantra chant (kirtan). Her sound encompasses rich influences of East and West, and aims to offer an experience which truly nourishes the spirit. Based in both London and New York, she offers regular concerts, sound baths, and workshops.

She released her debut album, ‘Like a River to the Sea’ in July 2015, and features on the Grammy-nominated ‘Bhakti Without Borders’ charity album (2016). Jahnavi presents regularly for BBC Radio 2’s ‘Pause for Thought’ and ‘Something Understood’ on BBC Radio 4.