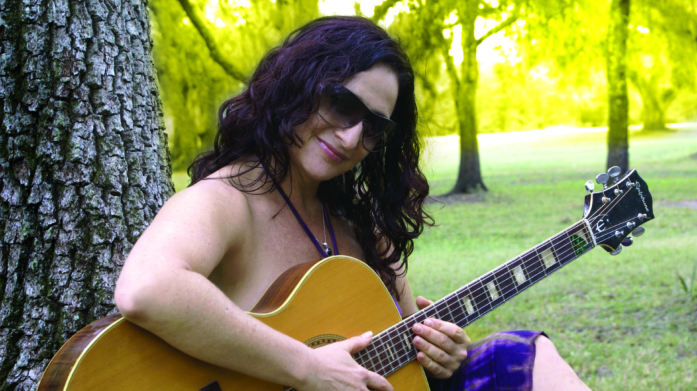 As frontwomen for NYC based rock band G-spot for almost 15 years, G. has a reputation for being a sexy siren, with a spiritual twist. She is known for commanding her audience’s attention by juxtaposing her sassy wit & naked vulnerability, her magnetism & enlightenment, her wrath & passion, with a no-holds-barred delivery of emotion.

Although occasionally she still goes back to her angry girl rock roots, her solo EP’s “There is Light” and “Here I Am” continue her exploration of consciousness in an increasingly complex world.  Her single, Breathe & Release received recognition in the yoga and conscious communities.  G. believes Breathe & Release was delivered divinely and her hope was to bring light, healing, relaxation, and renewal to those that listen to it. Recently G has been focusing on her songwriting and collaborating with others as well as exploring new genres and perspectives. She hopes to be able to bring her experience and talent into more commercial songwriting efforts.

With her band G-spot, she released two CD’s of original music to rave reviews and also caught the attention of the Film & TV industry. The title track of “Come Here, Go Away” was featured on A&E’s Rollergirls, her songs Revolutionary & Even the Mighty Fall were in the Independent feature film, “Just Another Romantic Wrestling Comedy”. Songs Happy Denial and The Harley song were also picked up on several cable TV shows.

Don’t miss her hilarious music video, “Fix Me” which takes you through a litany of methods one can try in their search for ways to get to that place of “being fixed”. From yoga to guru’s, therapy, cleansing, acupuncture, Reiki, 12 steps and more, offering the viewer a giggle with each experience.

G’s diverse combination of talents, singer-songwriter, Kundalini yoga teacher, and marketing consultant makes for a creative and multi-faceted perspective!  She is also the Founder of the Girls Rock & Girls Rule, an organization that was dedicated to creating exposure for women in rock.