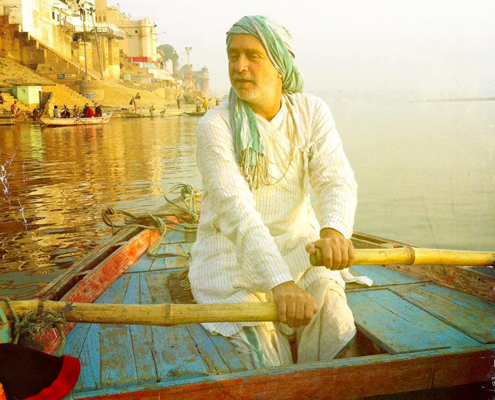 The Shyamdas Foundation, preserves, edits, publishes and disseminates Shyamdas’ written, spoken and sung contributions to bhakti—the “selfless spiritual art” of devotion; celebrates Shyamdas’ contributions to bhakti, producing new media about his remarkable life; supports kirtan musicians and listeners, by hosting events and facilitating the study and practice of devotional music; creates and funds scholarships, conferences, publications and other resources for students and scholars of bhakti, Sanskrit and Brajbhasha; and benefits the pilgrims and residents of Braj, through charitable works and culturally sensitive improvements to the region’s environment and architecture.

Devotional practitioner, translator, author, speaker and musician, Shyamdas (1953-2013) brought India’s ancient Vedic literature and medieval devotional renaissance to life in the West. An accomplished practitioner-scholar and guide to the 16th century philosopher Vallabhacharya’s Pushtimarga tradition, Shyamdas published more than 15 books on Bhakti Yoga and the Path of Grace. Shyamdasji’s overflowing good mood and ability to relate to every individual and situation with bhāva (divine, good mood) made him an instant best friend to so many. His profound contributions live on in their hearts, and in his audio and written publications.

After being called to India in a dream encounter with the famous Vrindavan saint Neem Karoli Baba, in 1972 Shyamdas travelled to India and took up residence in the sacred city of Vrindavan. Soon thereafter he began to receive bhakti teachings from his guru of the grace filled path, Shri Prathameshji. Shyamdasji’s was truly addicted to satsang—association with fellow truth seekers. He regularly led kirtan and satsang programs at yoga studios and retreat centers in America, Canada, and Europe. Of late he was a central figure in the burgeoning kirtan festival movement, headlining at events like Omega Institute’s Ecstatic Chant Weekends and the regional Bhakti Fests.

Shyamdasji’s love and commitment to the sacred region of Braj and its inhabitants inspired him to dedicate his time, resources, and connections to various charitable works, including environmental cleanup efforts in Braj, cow protection, architectural restorations, direct support to schools, musicians, and temples, and of course, feeding people. The Shyamdas Foundation established in his honor supports charitable works, devotional projects and musical studies, in the spirit of Shyamdasji’s amazing life and legacy.